Palau’s early history is still largely veiled in mystery. Why, how or when people arrived on our beautiful islands is unknown, but studies indicate that today’s Palauans are distant relatives of the Malays of Indonesia, Melanesians of New Guinea and Polynesians. As for the date of their arrivals, carbon dating of artifacts from the oldest known village sites on the Rock Islands and the spectacular terraces on Babeldaob place civilization here as early as 1,000 BC.

Palau and Britain’s relationship dates back to 1783, when East India Company’s packet ship ‘Antelope’ under the command of Captain Henry Wilson, was shipwrecked on a reef near Ulong, a Rock Island located between Koror and Peleliu, Palau. With the assistance of Koror’s High Chief Ibedul, Captain Wilson and his men stayed for three months to rebuild his ship. Palau’s Prince Lee Boo later went to England with Captain Wilson, where he fell to smallpox six months after their arrival and is buried at St. Mary’s Rotherhihte. The encounter precipitated a trading link resulting in an excellent historical relationship between United Kingdom and Palau.  For those of you who are interested in knowing more about this historical journey, please view a Google digitised pdf Second Edition (1788) copy of ‘An Account of the Pelew Islands’ and weblink to a book ‘The Interesting History of Prince Lee Boo’ written at the time.

European contacts grew and Britain became Palau’s main trading partner until Spain claimed possession of our islands in 1885. From that time onward, many foreign explorers called on Palau, and our islands were exposed to further European contact.

Foreign governance of our islands officially began when Pope Leo XIII asserted Spain’s rights over the Caroline Islands in 1885. Two churches were established and maintained by two Capuchin priests and two brothers, resulting in the introduction of the Roman alphabet and the elimination of inter-village wars. In 1899, Spain sold the Carolines to Germany, which established an organized program to exploit the islands’ natural resources.

Following Germany’s defeat in WWI, the islands were formally passed to the Japanese under the 1919 Treaty of Versailles. The Japanese influence on the Palauan culture was immense as it shifted the economy from a level of subsistence to a market economy and property ownership from the clan to individuals. In 1922, Koror became the administrative center for all Japanese possessions in the South Pacific. The town of Koror was a stylish metropolis with factories, shops, public baths, restaurants and pharmacies.

Following Japan’s defeat in WWII, the Carolines, Marianas and Marshall Islands became United Nations Trust Territories under U.S. administration, with Palau being named as one of six island districts. As part of its mandate, the U.S. was to improve Palau’s infrastructure and educational system in order for it to become a self-sufficient nation. This finally came about on October 1, 1994, when Palau gained its independence upon the signing of the Compact of Free Association with the United States. Palau became the 185th member of the United Nations (UN) as a full fledged member on 15 December 1994. Palau was admitted to the International Monetary Fund in 1997. It became the sixteenth member of the Pacific Islands Forum at the Madang meeting in September 1995 and as such is part of the recently approved Umbrella Agreement including Australia and New Zealand called the ‘Pacific Agreement on Closer Economic Relations’ (PACER). This agreement includes the future creation of a free trade area amongst the 14 ACP Forum Island Countries (FICs) called the ‘Pacific Island Countries Trade Agreement’ (PICTA), without Australia and New Zealand. Palau is also a (non-borrowing) member of the Asian Development Bank.

We currently have bilateral relations with over 50 countries, including the United Kingdom and the European Union.

Climate: Tropical climate with annual mean temperature of 27 degrees Celsius. Relative humidity is 82%. Rainy season from May to November. Typhoons are rare as Palau is located outside the typhoon zone. 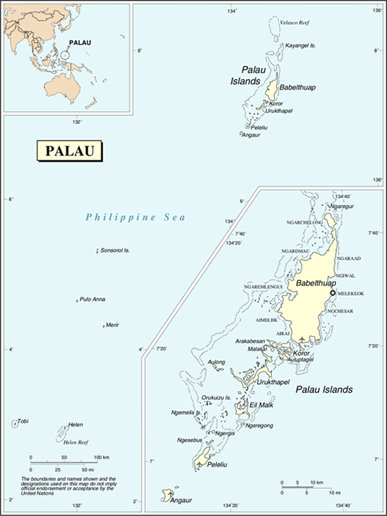 The Republic of Palau consists of eight principal islands and more than 300 smaller ones lying roughly 500 miles southeast of the Philippines. The islands of Palau constitute part of the Caroline Islands chain. About 70% of Palauans live in the city of Koror. The capital relocated in 2006 from Koror to Ngerulmud.

Palau’s per capita GDP – of $8,812.3 makes it one of the wealthier Pacific Island states

Tourism (and its attendant infrastructure changes) is Palau’s main industry. Our major draws are our diverse and pristine marine environment, making it a world-class diving centre, and a tropical island beauty. Visitors mainly come from Taiwan, Japan, China and the US. A number of British tourists also visit Palau every year.